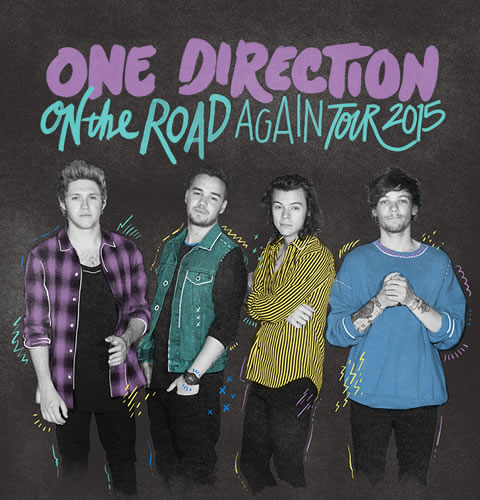 For five years, I have been dreaming of seeing One Direction in concert. Last night, at the Rogers Centre, that dream finally came true.

My two sisters and I had floor seats to the On the Road Again Tour. Not only was it an unreal concert experience, but also a night to remember, as my sisters and I had a hotel room right in the heart of the city.

Because there is so much that I need to talk about, I am going to do it in sections. This will be more than just a simple concert review. I will also be looking at the hotel we stayed at, I will also be sharing my outfit as part of my #100DaysofFashion challenge and of course, a review of four handsome gentlemen.

First of all, my morning the day of the concert began right at 4am. Why? It was the first day of my internship with Afiya Francisco, the Style Expert for The Morning Show (The post is coming soon!!). With enough coffee and first day jitters, I was wide awake for the remainder of the day. But I definitely knew that by the end of the night, I was going to be ready to crash and would want the comfiest bed available. Of course, The Westin Harbour Castle was the only option.

Not only are the rooms really nice and well-kept, the view of the harbour was the icing on the cake. Being in the heart of downtown Toronto really made me appreciate what it meant to be a Toronto resident and it gave me a sense of pride to say I am from here.

Sorry to be corny, but to quote a song by One Direction: “Don’t Forget Where You Belong.” No matter where life takes me, I know I won’t.

Day 71 – A Hundred Days of Fashion

When I saw Beyonce and Jay-Z in concert last year, I was in the nosebleed seats and I remember observing the outfits of those who had the floor seats from above. I remember they were all dressed so beautifully and wondered if they knew that their outfits were being admired from above. So when I discovered that we would have floor seats for the concert this year, the pressure was on to find an outfit that also could be admired from afar.

I will admit – I struggled trying to put an outfit together for this concert. I could have easily used any outfit I had planned from my closet, but none of them spoke to me. When your clothes speak, listen – that is the most helpful piece of information I can give you when you try on clothes for a certain event and you don’t feel “right” in it.

I had gone shopping, trying all my usual stores trying to find an outfit and nothing was catching my eye. That is, until I went off course and decided to take a look into Guess. They certainly have beautiful clothes, but I never thought that they would have anything that I would want or need. Boy, was I wrong.

I left with a beautiful two-piece black top and skirt with roses embroidered. This outfit is not only chic, but it is timeless in the sense that I can wear it forever and it will always be in style. And I guess you can say that my outfit choice is an homage to One Direction’s song, “Little Black Dress”!

I then paired this  an art deco ring and sandals. I was going to wear a statement necklace, but that would have been too much.

Because I didn’t want to look too formal, I opted out of wearing red lipstick and instead to wear a nude lip. For this event, red lips would have been too much.

Just a side note, Harry Styles and I definitely matched with our all black ensembles last night. We’re totally meant to be.

Ring – Gift from my Nonna 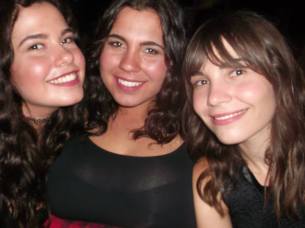 Okay, now time for the real reason for this post: One Direction themselves.

First off, Icona Pop opened for the band and while I am not personally the biggest fan, I thought that they helped to get the show going.

I will admit, when Zayn Malik left the band a few months back, I did question whether the band would be able to stand as a quartet. As I soon discovered, the boys came out stronger and better than ever.

What made their show stand out is that they are sure to do little “pranks” or fun things during the show so that the audience could get an intimate glimpse of their personalities. Before the show even started, they were playing “peek-a-boo” behind the curtains so they could get fans riled up and excited for them to come on stage.

From their latest album, FOUR, the boys sang a good bulk of the songs. These songs include: “Steal My Girl”, “Ready to Run”, “Where do Broken Hearts Go”, “18”, “Girl Almighty”, “No Control”, “Night Changes”, “Fireproof”, “Stockholm Syndrome” and “Act My Age”. They also sang their newest single, “Drag Me Down.”

The boys were sure to sing songs not just from their latest album but also songs from their previous albums, too. To name a few: “Little Things”, “What Makes You Beautiful”, “Little Black Dress”, “Little White Lies”, “You & I” and “Story of my Life”. 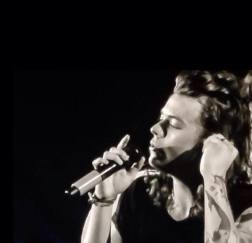 When they sang “You & I”, those who were on the floor were given signs that read
“Thank you for staying with us” and were told to hold them up while they sang that song. The boys had explained that it was a thank you to their fans for being loyal to them for the last five years of their career and for continuing to do so. I think that really does demonstrate how much the boys value their fans.

I won’t even deny it; I have a huge crush on Harry Styles. Niall Horan is a close second, but Harry has a very special place in my heart. He was killing me last night with his long hair, his simple all black outfit, his muscular tattooed arms and his thick accent.

I don’t know what I’d ever do if I met him in person. Realistically, probably try to calm myself down so he doesn’t think that I’m a crazy fan girl.

Whatever your opinion of the band is, you can’t deny that they are four young men with a lot of energy and charisma, and it’s undeniable that they genuinely love what they do.

I will definitely never forget this concert experience. It was more than I could have ever expected it to be. I would for sure see them in concert again. In a heartbeat, no questions asked.

These boys have an incredible future ahead of them. I am excited to see where the road takes them next.

There was an error retrieving images from Instagram. An attempt will be remade in a few minutes.